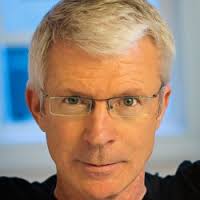 Mark Coggins and the Sexy Outsider

Mark Coggins has already taken the gold in this year’s Independent Publisher awards for his fifth August Riordan mystery, The Big-Wake-Up ( http://www.independentpublisher.com/article.php?page=1362), and he’s now a finalist for ForeWord’s  Book of the Year award in the mystery category http://www.bookoftheyearawards.com/finalists/2009/category/fiction-mystery/.

If you don’t know August Riordan personally (yet), you know his progenitors.  Sam Spade and Philip Marlowe are the most widely-known of these tough-on-the-outside, soft-as-nonfat-yogurt-underneath, kick-ass-and-take-names-later dicks, I mean PI’s.

Greg Fallis has written, “Dashiell Hammett, it’s said, took murder out of the drawing room and dropped it back in the street, where it belongs. With the publication of The Maltese Falcon, Hammett forever changed detective fiction. Hammett’s protagonists weren’t effete intellectuals; they were street-wise common men who didn’t mind getting their hands dirty. In fact, at times they actively enjoyed getting their hands dirty. Their morals were questionable. Their ethics might not be for sale, but they could be rented.”

The Maltese Falcon was published in 1930, and the mystery subgenre it launched, often called “hard-boiled,” is as popular now as it was 80 years ago.  What is its enduring appeal?  Thank you for asking.  The hard-boiled-P.I.s are successors to guns-for-hire like Paladin (the name means “knight”), Sheriff Matt Dillon and other champions of the wild west.  This is a uniquely American genre, even though recent authors have taken its heroes international.  They are aloof, sexy, and ultimately outsiders.

In The Big Wake-Up, Mark first pay homage to one of his mentors with the title, a spin on Raymond Chandler’s The Big Sleep.  The opening chapters (after a high-speed chase through San Francisco) continue to respect tradition with the client with a problem whose problem is not at all what he claims.  Soon Riordan has unwittingly fallen into a “plot” (somebody stop me) to recover the remains of Eva Peron.  The real-life journey of Evita’s body is still redolent of mystery even now that the “truth” is supposedly known.   Coggins’ story imagines that Evita is not where she should be, and Riordan had better find her before the aptly-named Isis does – Isis being a woman who wields a mean enucleation spoon (the device used to remove eyeballs).

Mark would be far too modest to want to me to list all the other awards and recognitions granted this latest novel, not to mention his earlier fiction, so check out http://www.MarkCoggins.com.  The trailer for Wake-Up is worth the price of admission.

You Can Take It with You

Baby You Can Kindle My Fire